Rituals and Customs of a Nyishi Wedding in Itanagar

Itanagar is the capital of Arunachal Pradesh. Itanagar is inhabited by many tribes, Nyishi being the 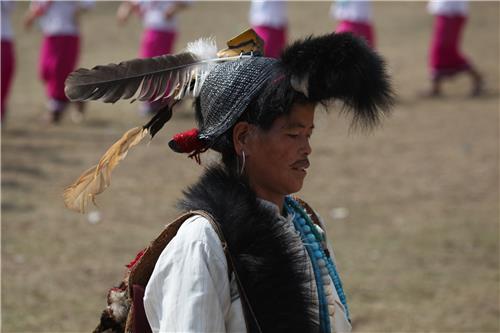 most predominant tribe in Itanagar. The word Nyishi means civilized human being. These mountain people have certain perceptions that differ largely from that of city dwellers but the simplicity in their lifestyle can be measured from the efforts they put in to uphold their customs. They are pious supporters of their age-old traditions and they endeavour to pass down these beliefs from one generation to the next. There are set guidelines on how an individual should act in the society and when a person deviates from this guideline or commits any mistake he is explicitly punished. Political development and establishment of administrative centres have brought many changes in legal system but they still abide by these guidelines. Life of Nyishis revolves around rituals which is an inseparable part of a Nyishi’s life. They have rituals for every occasion; be it agriculture, birth, marriage to rituals related to cleansing of soul. 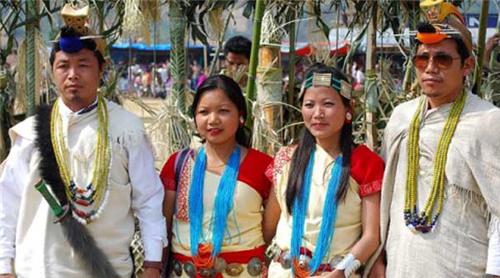 which has to be strictly followed; failing to do so will mark the marriage unacknowledged. The Nyishi tribe considers marriage as a sacred bond. Polygamy, child marriage and forced marriage are still practiced in the Nyishi community. Although such incidences have reduced to fair extent, these evils of the society have not yet dropped to a desirable level in Arunachal Pradesh.
Chow-Pachaw / Miri, a middle man for marriage negotiation plays a pivotal role in the wedding ritual.

A Nyishi wedding commence with boil egg examination, chicken liver examination, and pig liver examination which is carried out to predict if the alliance will be good for the families or the couple. The Miri and his assistant help in the negotiation process of the marriage. An auspicious date is chosen on which the groom's family visit the bride’s home along with hopha (a token of respect ideally sugar) and Baan Moya (flower platter). The middleman acts as a negotiator of the groom’s family and helps both the families to decide the compensation for the bride. They believe that this exchange of money will ensure the bride’s happiness in her new home. The decision is kept a secret till the second meeting of both the families. In the second meeting the marriage date is fixed followed by exchange of gifts which include cloths, different variety of meats, swords, ornaments, animals especially Mithun. In earlier times the marriage gift list also included gifting a slave to the groom’s family. The Miri then seeks the hand of the bride on behalf of the groom’s family.
On the main wedding day the bride arrives at the groom’s place. When the bride sets off for the 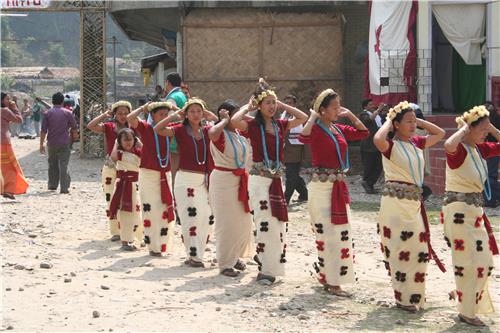 groom’s place the dapo dignam is raised. It is a form of veneration which is done to seek almighty’s blessing to solicit the deities and nature to witness the wedding and stand by their side during days of necessity. Cleansing of one’s mind and soul before any auspicious event is an important ritual in any tribal community. They believe that if this ritual is not done properly then it will bring a lot of trouble and miseries. The Nyishis perceive that nature includes human as well as spirits and it is imperative to maintain a perfect equilibrium in nature. They believe in life on the other side of death and thus they worship spirits. Nyishi sacrifice animals for the appeasement of the spirits and deities. On the arrival of the bride the Changtun Phahi, the purification ritual of Nyishis, is performed. The bride is asked to sacrifice an animal while the priest chants prayer. The Changtum Bheenam or the thanks giving ceremony is the last occasion of the wedding which is done by exchanging gifts and ornaments as a token of gratitude. Like any other marriage in India, even an Arunachali wedding is incomplete without feasting and celebration. But ideally a wedding of the highlanders is simple as compared to the grand weddings of the townsfolk.

Explore more about Culture of Itanagar